For the purist, antique jewelry has to be over a hundred years old to be regarded as a true antique piece. When I first started in the antique jewelry business over 30 years ago. Art Deco Jewelry from the 1920' and 30's would have been regarded as Estate or Vintage jewelry, now however in the year 2020 some of the early pieces of Art Deco jewelry can now be truly classed as Antique Jewelry.
So what would now be classed as Estate or Vintage Jewelry? For me it would be jewelry from the Retro period of the 1940' and 50's.
Many in the antique jewelry business think of the 1940's as a restrictive time period for high end jewelry. This was of course due to the outbreak of the Second World War. The general climate of wartime hardly encouraged extravagant displays of jewelry, but also jewelry production was halted due to widespread legislation, introduced in all European countries and also in the US regulating the control and use of precious metals. Platinum was banned from jewelry production as it was needed for the armaments industry. The use of gold was also restricted, and those wishing to commission a piece of antique estate jewelry were required to supply if not all, most of the raw material. Now after 40 years where platinum had reigned as the supreme metal for all estate jewelry designers, yellow gold now became the main feature of the entire antique estate jewelry production of the 1940's.
Also the war greatly restricted all trade, which meant gemstones were in short supply. Gemstones were taken out of antique jewelry pieces, and diamonds out of antique engagement rings, with the pieces being completely re-designed; and there was a widespread use of synthetic sapphires and rubies. When precious stones were used in antique jewelry pieces they were mainly quite small to keep costs down, and this became a time period where large semi-precious stones were favored. Aquamarine, Amethyst, Citrine and Topaz at this time period were relatively inexpensive, yet highly effective.In spite of the great difficulties created by the war, antique estate jewelry became an ideal form of portable capitol, and therefore went on being designed, produced and sold.
During the war years the days of grand formal social gatherings, and  the wearing of lavish gowns and antique pieces of jewelry, were replaced by less ostentatious events such as cocktail parties. Estate jewelers had to adapt to the new circumstances, and it brought rise to a more practical form of estate cocktail gold jewelry set sparingly with gemstones, to reflect the new social austerity. Antique estate necklaces and bracelets became very popular and were generally of tubular bands. Of which there were two types. The first was commonly known as the snake chain, which consisted of a succession of tightly interlocking gold links. The second type was known as gas-pipe linking, due to its resemblance to the tube of a gas pump.
The Retro estate jewelry of the 1950's reflected the strong economic boom which followed the war, and the new prosperity which ensued.
The overall design of these estate 50's creations, incorporated lavish displays of gemstones, reminiscent of the necklaces of the Art Deco period, but the estate jewelry designs of this period tended to be much more fluid and asymmetrical, with the use of channel settings. Platinum pieces did make a comeback, but yellow gold was still the most widely used precious metal of this time period. It is also interesting to note that during this antique estate period, advances in metallurgy led to the creation of white gold, which they started to use as an alternative to Platinum.
Diamonds again reigned supreme during the 1950's. In June 1951, the French edition of Vogue published an article entitled 'A Diamond is Forever'  The diamonds reputation was also enhanced during this estate period by the song, 'Diamonds are a Girl's Best Friend', sung by Marilyn Monroe in the 1953 film Gentlemen Prefer Blondes. Although diamonds were the most popular gemstone, emeralds, rubies and sapphires were often used to add a touch of color to otherwise monochromatic evening creations.
To all you ladies, who want a new best friend, or gentlemen who want to give your wives or girlfriends a 'forever present', we have a large collection of Antique, Estate, Diamond and precious gemstone pieces from both the 1940's and 50's along with earlier pieces of antique jewelry, here at Beverley R Antique Jewelry in Chicago Illinois. We are now open after the pandemic, and look forward to seeing you.
1/ 18 kt. Cabochon Moonstone, Sapphire & Ruby Ear clips. French hallmarked. Circa 1940 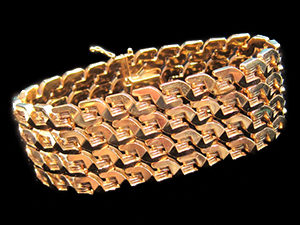 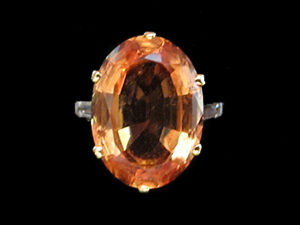 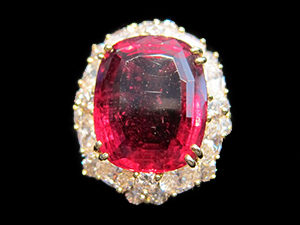